The technique of Bollinger Bands was developed by John Bollinger. The Bollinger Bands are two bands that are placed around a moving average. In addition, Bollinger Bands are placed at two standard deviations above and below the moving average, which the moving average is usually set at 20 periods. Now you should know that Standard Deviation is a statistical concept that describes how prices react around an average value. With the use of two standard deviations this ensures that 95% of the price data will fall between the two trading bands. The general rule here is that the market prices are considered to be overbought when the prices touch the upper band and this produces a sell signal. On the other hand, the prices are considered to be oversold when they touch the lower band that produces a buy signal. 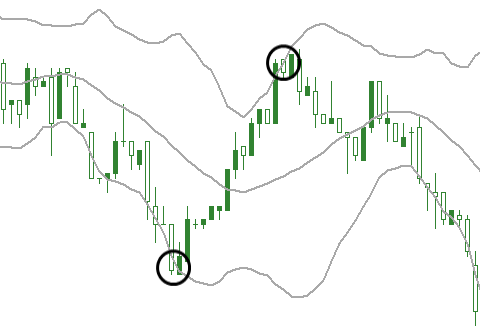 In the event that the price breaks the lower band, this signals the start of a new move. A downward break is considered as a bearish signal and an upside break is a bullish signal.

Despite that using Bollinger Bands is relatively easy, you should at least combine your strategy with a basic chart analysis to confirm your signals.

Lessons in this section: